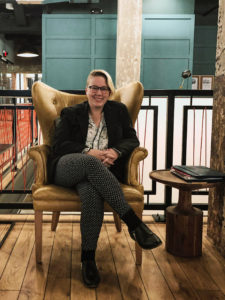 Proving myself worthy has always been a driving force in my life. For as long as I can remember, I had to fight for a place in the world. When I was in elementary school, it was dominating the boy’s only game of four square during recess, showing them I was just one of the boys. Later on, it was adults in my life telling me that I need to look at mainly community colleges because that’s all I’m going to be able to afford. Proceeding to get accepted into a private college in Philadelphia instead. During my college years, my biggest enemy was myself. Letting negative self-talk throw me into a spiral, leading down a dangerous path. Through the support of my close loved ones, here I was fighting tooth and nail again to prove something. I am a fighter, I just don’t have the scars on my hands to show it.

Resilience is a word I have a complicated love/hate relationship with. The idea of having the spirit of a survivor and being able to push through anything speaks to me on so many different levels. On the other hand, sometimes it means that you have been through so much stuff and dealt with so many things that nothing surprises you anymore. The happy medium I have grown to love is idea of working hard to better oneself through the challenges. Welcoming tests from the universe in order to grow. Putting in the work is what matters.

I am not supremely talented in what I do nor did I start off with any abilities related to my current position. The bottom line, I just worked my butt off. Work ethic is one of my favorite things to talk about in morning meetings because it is something anybody can do. It doesn’t matter where you came from or who you are, if you can work hard in the business, you can go anywhere. So I am going to end with the story of Tom, Richard, and Harry.

There once were 3 brothers that lived identical lives, same interests, same hobbies, same jobs. They all have the same skills so they work at the same job at a factory. They all come home for the holidays to their father who is a proud man. He believes his sons are the best at everything they do. The father asks each son what they got for the holidays from work. Harry gets a promotion that is right under the owner and a big raise. Richard gets a small raise and is generally happy. Tom just gets a holiday card. The father, in a rage, goes to the factory to confront the boss the very next day after the holidays are over. He thinks Tom is being discriminated against based on his brothers. He walks into the owner’s office. The owner sits him down and tells him to watch what happens over the course of one day. The owner calls on Tom and says “We have a new shipment, go check on it for me”. Tom comes back 15 minutes later and says the shipment is there. The owner dismisses Tom from the office. The owner calls on Richard and says the same thing. Richard comes back in an hour and says its there but we are missing 3 boxes. The owner dismisses him and the father makes excuses for Tom. The owner says, “I’m not done yet.” The owner calls on Harry and says the same thing. Harry comes back 4 hours later and says there are 3 boxes missing. They are essential components for the season so he looked up shipping companies to replace the ones needed, creates a comparison for the owner. The owner looks back at the father and says, “do you see the difference?”